Oh anxiety, you are not my friend in times like these.

I always knew that living in Florida = taking a risk. Other than hurricanes, our rivers are full of alligators, our mosquitos have dangerous diseases, our water levels are so high that basements are impossible, our schools rank very low, and we have no emissions controls on vehicles (thanks to Jeb Bush). 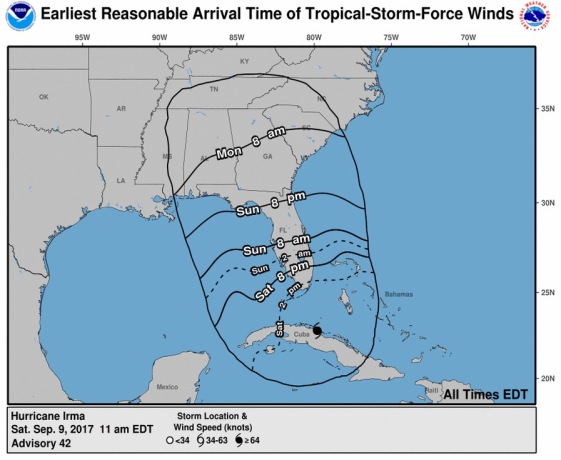 I live in Pinellas Park—a suburb of St Petersburg, right in the very center of Pinellas County, which is on the west coast of Florida in Tampa Bay. The Gulf of Mexico and endless beaches are 10 miles away—something that I normally love about living here. Today I hate that I live in evacuation zone D.

Evacuation Zones are About Water

Flooding and storm surge. We are 20 feet above sea level, which is relatively safe from storm surges, but not invincible. As the county sheriff said this morning, “you hide from wind, you evacuate from water.”

Our house is made of block and we have hurricane (double-paned + thick) windows. We’ll probably be okay if we stick around. But it’s that uncertainty.

Sandbag Gifts from the City

Earlier in the week, my boyfriend and I each took turns picking up free sandbags from the city. We have 20 to split between our two doorways. Sandbags really only help prevent storm surge water from flowing into the house and bursting the doors open. They don’t keep water out, but it’s supposed to help.

Hurricanes Past and Present

In 2004 I lived in Orlando, belonged to a community of artists, and my close friend and I were getting ready to have our respective pottery and paintings showcased in a small local gallery. The opening was scheduled for Friday, August 13. It was exciting!

But it was that Friday, August 13 when we were directly hit by Hurricane Charley. It was scary and a fast-moving, dangerous storm. My boyfriend at the time and I lived in a rental house in Longwood, a northern suburb of Orlando. We bought supplies and prepared, then we watched as the giant oak trees around us tumbled to the ground in the craziest winds I’ve ever seen. We slept in the bathroom that night.

In the morning when we woke up, the windows were intact, the house and car were unscathed, but the electricity was off. We spent ten days stranded in our neighborhood—the streets were littered with 100-foot oak trees and there was a curfew while the city restored itself. Our water was working but announcements on our battery-powered radio told us not to drink it due to contamination. We were able to walk to a nearby store, which also had no power, to pick up water and propane for our barbeque grill. So, we cooked every day on the grill, whatever was thawing in our freezer, and we were generally just fine.

We entertained ourselves for those ten days by hanging out with our neighbors, playing games and cards, reading books, fanning ourselves (it was mid-August in Florida—painfully hot and humid), taking cold showers, and listening to the radio. Eventually, life got back to normal; we were able to return to our jobs, get around town, and resume our usual activities.

Sadly, my favorite parks (and there are many in central Florida, such as Bok Tower Gardens, Wekiwa Springs, and Leu Gardens) were all devastated and shut down for months to years. Even though it was tolerable, this storm changed our lives. And at the end of 2004, I moved to St Petersburg.

I know it probably won’t be so bad. We’re going to be okay. We’re boarding up our windows (as soon as the neighbor lets us borrow their hammer drill, that is), and we decided to evacuate to our friends’ place in Gainesville, north Florida. All predictions show that the hurricane will be milder or maybe even a tropical storm at that point. We just don’t know what it’s going to do here.

Hurricane Charley was supposed to hit Tampa in 2004—all predictions had it directly hitting the bay. But it veered east from the Gulf much sooner and made a straight shot to Orlando where hurricanes rarely go. Could that happen again this week? Yes. Could anything happen again this week? Considering nobody can predict the future, and weather predictions are a general crapshoot, I think yes.

It. Is. Fucking. Stressful.

There’s no other way to put it. We are prepared, we have a plan, and we’re being as smart as we can be (I think). But I’m scared. Could I lose my home and come back to a pile of rubble? Could the storm follow us to Gainesville and obliterate our friends’ house too? Could all of Florida be returned to the swampland it once was? Could Hurricane Irma leave nothing behind in its wake? If Irma doesn’t destroy us, will Jose? Is this the beginning of the end of normalcy for us?

Hyperbole aside, I don’t know how to prepare for imminent doom. OK, I’m obviously not suspending the hyperbole. I just want to feel safe.

Forecasts have the storm at a category 3 when it hits our area. That’s not so bad. So we decided to stay home. Why not evacuate anyway? The outer bands of the storm are here. The weather is dreary, wet, and windy. We’re just not sure we should be making a 2.5-hour drive right now.

So we stay. I feel a little less anxious now that I’ve made my decision and I’m prepared. I talked to my family and closest friends. I’ve talked to our neighbors, who are all staying in their homes.

Now we just wait for 12 hours.