Everyone I’ve talked to about this trip has asked the same question.

It’s an easy answer: I feel called by the island. To begin,

my father was born in Italy,

and I have a natural fondness and familiarity with Italian culture. When he was five, the family immigrated from Azzano Decimo, in the northern province of Pordenone, Italy, all the way to freezing Thunder Bay, in northwestern Ontario, Canada.

But Thunder Bay, possibly even most of Canada, was a hub for Italian immigrants post WW2. My family was able to preserve our rich heritage and celebrate our Italian traditions with gusto. Nonna taught me how to make gnocchi and focaccia and pizzelle and ravioli and pizzelle. Italian vocabulary was in every conversation and Nonna’s thick accent rolled like Mediterranean waves as she reminisced about her beautiful life growing up in Venezia.

It’s not only about family and tradition,

my interest in Italy and specifically Sardinia also comes from my DNA.

Last year I did a DNA test to identify my ancestry and it wasn’t at all surprising! Mostly and strongly Eastern European (explained by my mother’s Slovak parents), and then a chunk of Italian with the remaining crumbs Greek and Balkan.

Of the mix, this 0.7% Sardinian was especially attractive to me. (Interestingly, it was originally presented to me as 1.1% – 23 and Me constantly updates my ancestry composition based on new and evolving data from other users.) This isolated island paradise full of centenarians – could this be part of my heritage? Like finding the tiniest (0.7%) piece of a puzzle that belonged to my history of being, a sparkly Mediterranean puzzle. 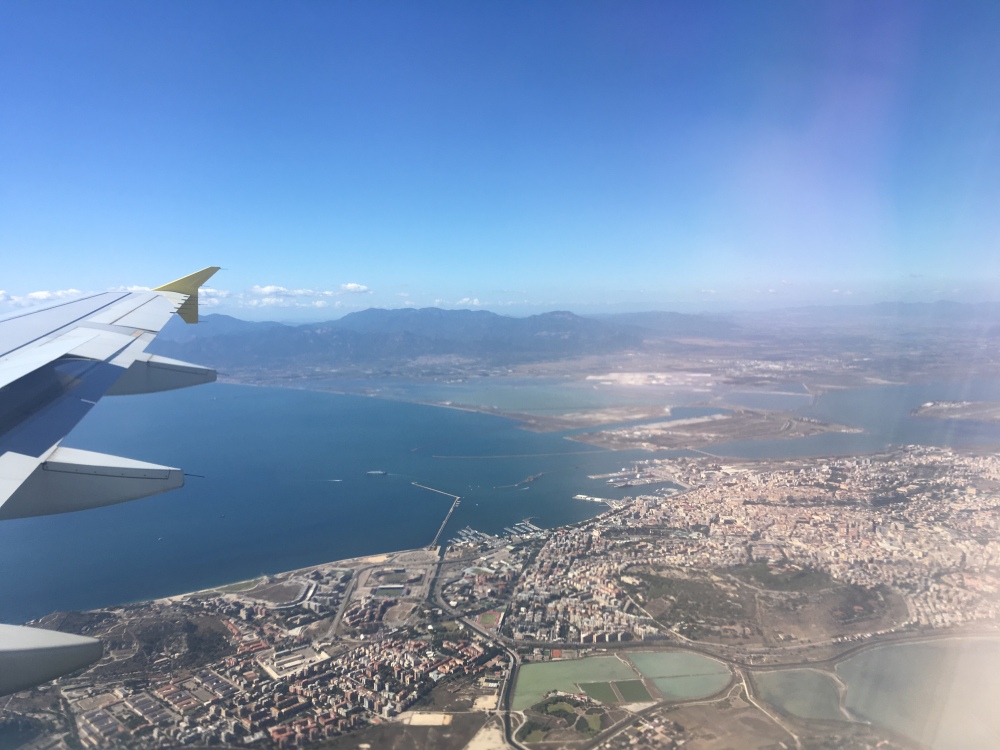 On the flight from Barcelona to Cagliari, the capital city of Sardinia.

So here I am in Sardinia for ten days!

I dream of moving to Italy and I wonder if Sardinia could be my home.

Could this be a place where I settle? Where I grow some new roots, build something different from what I’ve been building the last fifteen years?

There are so many things to consider before I move. It’s a dream right now, and I know that. But it was an affordable and quick flight from Barcelona, and I decided I had to come.

In 2016 I spent ten days on a solo trip around Corsica – a Mediterranean mountain and beach island that’s part of France. The culture there is warm and open, and the landscape a stunning array of sharp post-volcanic mountains next to sprawling sandy beaches. I loved Corsica so much! I feel it’s the most beautiful place I’ve ever been! So far…

Could Sardinia be just as gorgeous as Corsica but Italian? The next ten days will tell!

We have a car. And we’re staying at 5 different Airbnbs. This is way more movement than I usually like for traveling. But I desperately wanted to get a taste of the entire island. So we started in Cagliari in the south earlier today, but we ended up in Nuoro, in the North for the night.

As I write this, I’m laying on a tiny twin bed in this rattly room in a rattly apartment in a building of large old apartments. The fresh wind is blowing hard outside and my bedroom window is cracked open. The wind is blowing so hard it’s pushed my wooden door open slightly several times now and banged it against the door frame. It squeaks and creaks and then thump! Creepy!

We’re in a mountain town tonight, the city of Nuoro. It’s the hometown of the famous Sardinian author Grazia Deledda, who won the Nobel Prize for Literature in 1926 “for her idealistically inspired writings which with plastic clarity picture the life on her native island [Sardinia] and with depth and sympathy deal with human problems in general” (nobelprize.org). I started reading her novel Cosima and it’s lovely and soulfully written:

“But for the writer it was a complete moral disaster: not only the soured aunts, and the well-meaning people of the country, and the women who could not read but consider the novels as forbidden books, all turned against the girl: it was a fire of malignity, of scandalous suppositions of libertine prophecies: the voice of the Baptist who, from the opaque prison of his savage chastity screamed against Herodias, was less inexorable.”

So much about Sardinia feels meaningful to me, and I’m excited to really learn about the island as a land and the culture of the people.